Here for your pleasure, another tale of Shikoku and its efforts to embarrass me for other people's entertainment when I recount the experience years later.

We all get wrong numbers. It happens. Someone gets the prefix wrong or mixes up the last two numbers while dialing. We've all had them, and we've all made them.

One night—while I was living in Niihama—around 11:30 my cellphone did its little "wow look at me vibrate off the fridge and fall on the floor with a resounding THUNK" dance it would do when someone called. I had taken to leaving it on the fridge at night because it kept falling off the low table in the main room I slept in and waking me up.

Assuming it had to be someone important because they'd called about ten minutes ago, I went over and looked at the number. I didn't recognize it, but it was the same number that had called previously. So I decided it was a good idea to inform whomever was calling they had the wrong number. In English.

Answering the phone with hello, I was then drawn into a conversation with some guy who spoke very little English.

Ok, in my defense, I have no idea why I didn't just hang up after I said "you have the wrong number."

But whatever, he asked if I was American, and I told him he was no I was Canadian. Then he starting asking about the fax. I told him the fax was at the school (as I think I may have mentioned in the practiced Japanese phrase the company taught us that I was a children's EFL teacher.)

Anyway, for about about a minute he tried to insist on the telephone fax, and I tried to tell him that I didn't have a fax machine. Until, clearly frustrated (in more ways than I realized) he clearly said "telephone SEX."
Posted by Chandra Rooney at 1:31 PM No comments: Links to this post

filed under: True Tales of Japan 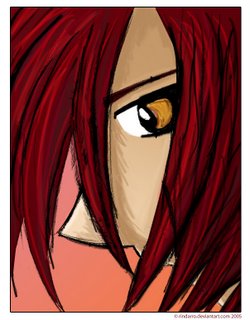 The still of dawn, as the sky turns orange and pink.

I wait for you.

Knowing that it is impossible for you to meet me.

For you are gone.

And I am still here.

Today, at 5 am, my great-grandmother passed away.

We'd been expecting this for some time, she had cancer that had spread throughout her body. Diagnosed over a year ago, she'd been moved into a care facility.

My grandparents moved from Alberta to British Columbia, to be closer to my family. My great-grandmother remained in Alberta. Over the past year, my grandparents have gone back to visit Baba many times.

The last time I saw her, was over a year ago. In the summer. She seemed defeated, tired and worn out. It wasn't the way I wanted to remember her. So I always think of her with her ruddy cheeks and almost toothless smile. She loved to laugh, and even when her English started failing, she was still sharp as a tack. She'd laugh with us and tell us jokes in broken English or speak to Grandma in polish and then Grandma would translate.

My grandmother came to Canada from the Ukraine when she was 2 years old. My great-grandmother was a landed immigrant, and I am the oldest of the second generation born in Canada on our side of the family.

My great-grandmother taught me how to make perogies. Once we all made them together, all three of the great-granddaughters helping. It was around Christmas years ago. I think I might have still even been in high school. That was a good day.

My great-grandmother nurtured my love for tea with milk and sugar. When she lived a 14 hour drive away from us, and we go visit in the summer, when we got there she'd make me tea in porcelain cup with gold trim and the image of a couple preparing to dance on it. It was fine bone china, made in Japan. After she moved to Alberta, she gave me the cup and saucer. I haven't drank from it since I was a child, but I kept it out where I could see it.

When I went to live in Japan, in hopes of reconnecting with what I had felt during the month I visited there two years before, my great-grandmother gave me money. Money I didn't know she had, so that I could go and have one of the most important and life-altering experiences I've thus far.

Because she gave me the money, I could loan some of the money I'd saved to my friend so he could go and live in Japan. Her gift gave two people a chance to do some extraordinary, something that we needed to do.

She was an amazing woman, who left her home to go to a country and start anew when she didn't the language. That's courage you don't see everyday.

I think I'm going to try and put these emotions into fiction.
Posted by Chandra Rooney at 12:59 PM 2 comments: Links to this post

For the five months I lived in Kumagaya, I had an account at the Asahi Bank, aka the Great Bank of Miffy the Bunny. I'm serious. Their mascot was Miffy. I had her with some ducks on my bank card. (Ok, yes, I chose to have that image, but still, it's the bank of Miffy.)

In North America, the ATMs are open outside of banking hours. That's why we have them. You can go to an ATM at your bank on the weekend or a holiday or after hours, and you can take out money.

Not so, young grasshopper, in Japan. In Japan, if the Bank of Miffy was closed, then the bank's ATM is closed. Now, we (myself and the other teachers) got around this by going to a 7-11 or a general ATM in the train station. (The one in the train station was open until 8:30 or 9:00 pm, which was often when I was getting home.)

However, the Bank of Miffy tended to close on odd dates. It had its own strange bank holidays. We're not certain if this had to do with branch renovations or standard holidays, but the Bank of Miffy was often closed.

When the Bank of Miffy is closed, they are closed.

I also have a story concerning a money order my grandmother tried to send me for my birthday while I was living on Shikoku. The money order was made out to one Japanese bank, not the Japanese bank I had an account with. On Shikoku, we had an account with a bank only on Shikoku. So this money order had to be processed through a bank on the main island, who took some of it for the fee, and then it had to be processed by my bank, who would also take a portion for the fee.

Well, no, said I. I did not. Oh well, it was the thought that counts, right? And at least the bank called me to ask instead of just taking the fees.
Posted by Chandra Rooney at 1:25 PM 2 comments: Links to this post