"Tell Us about Paris!" Day One (Wednesday)

All right, so that wasn't exactly what was said but it makes a better heading that "how was Paris?" (It's that '!' at the end screaming at you to read.)

BTW, I was up for over 24 hours. That's why travel is nifty.

On the plane to Charles De Gauille (CDG), I attempted to sleep and discovered that even my tiny size is not compact enough to fit across two airplane seats, & read The Phantom of the Opera.

At CDG, I went through customs without speaking. Then I had to board a crazy bus that looped, double-backed, and intertwined its route as if it was in a silly Blake Edwards car chase sequence from The Pink Panther. All leading to not Terminal 3, as I was promised, but a drop-off point for Terminal 3's walkway. In the rain.

Once inside the Terminal 3 arrivals, which almost rivals the Chicago O'Hare and LAX for dive-o-tastic Airports of the World, I sat and read The Strange Case of Dr. Jekyll and Mr. Hyde, discovering that most of the film/tv/cartoon adaptations and parodies of it get things wrong. Mr. Hyde is not a lumbering giant of massive evil proportions, he's a pale drawfy thing that you can't quite figure out what is wrong with, but leaves you feeling dirty nonetheless. Like a human white moon nobby whatsis from Lovecraft's DreamWorld stuff.

Katy and I met up after I'd spent sometime staring at the really high ceiling. We climbed into a Mercedes and the taxi driver took us off to our hotel. Le General Hotel was hidden down a side street off away from the Monument to the Republic.

We walked in, overpowered by the mod pink and stark white minimalistic cool that would make Apple designers weep with envy, and checked in. Up to a room on the fourth floor, which looked like someone had been napping in the bed and had a bottle of hard liquor on the nightstand. Returning back down to the front desk, we were then given a room on the third floor. (Better view of the apartment across the alley from us.)

After settling in and exchanging overdue birthday/Christmas gifts, we reorganized and headed off with both a walking guide and a map provided by the hotel to find The Pompidou Center. Being a massive building dedicated to modern art, it shouldn't surprise you the thing looks like something out of Blade Runner. Katy wanted pictures.

We found our way there with relative ease, and debated. Did she want to take photos now (in the afternoon) or should we hurry on to the tea place I had read about in my walking guide? The tea place was only open until 7:30 (it was around 5) and Katy decided the center might make better pictures at night when it was light up. So off we went to Mariage Freres. It was an experience, and we bought tea afterward. Both of us sought the Sakura 2000 (green tea with cherry blossoms in it.) Katy added The Tea of Legends (I kid you not) to her order, while I—also completely going by name—finally broke down and purchased some Sencha Ariake.

We paused in a cute little chocolate shop where I, misunderstanding the secret polite code, forced Katy to have to buy expensive chocolate. (Sorry.)

After leaving the chocolate shop, we made our way back the Pompidou Center so that Katy could take some pictures. It was raining. Hard. And neither of us had umbrellas. Katy's excuse being that she "was from England," and mine being that the only working umbrella that I knew the location of had gone in someone else's suitcase. We got soaked through and through, but she managed to take some photos. We then got rather turned around trying to return to the hotel, so after more soaking and returning to Hotel de Ville, realized we had walked in a big circle.

It was because the Rue Temple, which we followed towards the Hotel de Ville originally is in the wholesale jewelry district. I know this because it's close to The Hotel Molay where I stayed during my first trip to Paris in May 2003. At night the street is very narrow and dark, kind of spooky in the rain with all its locked up little shops. But we found our way to the La Republique eventually so it was all good.

Apparently the people who ran the Chinese restaurant, Sin An Kiang, we had dinner at thought we were a nice spectacle, because they put on on display in the front of the restaurant visible outside.

Anyway, back at the hotel we broke out the Haindl Tarot cards Katy got me for my birthday.

The night ended with a phone call from my uncles to say they'd arrived and their flight from Italy was "an experience." I don't really remember more than that as I was half-asleep. So it was a good thing I told Katy that they would call us the next morning.
Posted by Chandra Rooney at 1:09 PM 5 comments: Links to this post

My brain seized up and stopped functioning for a full 5 minutes when I saw this.

I don't think it's weird at all that I'm both terrified & strangely attracted to it the same time. (Shiro does that to people.)

Posted by Chandra Rooney at 7:18 PM 5 comments: Links to this post 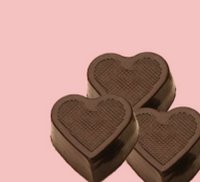 Since Christmas Eve functions more like Valentine's Day in Japan, you'd probably think that they don't have any sort of observance for the actual date.

As February 14th approaches, Japanese women prepare to give the men in their life dark chocolate. Yes, that's right, I said "men." Not just the man or the potential man. Japanese women give chocolate to their bosses and their coworkers, too. This is called giri choco or "obligation" chocolate, given to the men who have important—but non-romantic—roles in their life.

As for that special man she'd like to have in her life, he receives honmei choco. This chocolate is traditionally home made, but it's also acceptable to purchase expensive, high quality chocolates that have been made specially for Valentine's Day. If the woman is already in a relationship, the she'll probably give a little gift with the honmei choco to her significant other.

It's a huge deal. There was a little cake shop by the bus stop in a town where I had one of my schools. In January, display of big red heart-shaped boxes appeared in the forefront of the store advertising honmei choco you could preorder.

The idea behind this, as I was told by Waka-sensei, is that traditionally Japanese girls are supposed to be very shy. Valentine's Day is a chance for females to express their feelings to a boy without being singled out or putting themselves at risk of embarrassment. (All of this is very funny once you realized that Japanese guys expect women do all the work in the relationship. The woman says when and where they'll go out, how far they'll go, where they stand, etc.)

Sounds pretty one-sided, doesn't it? Well, the Japanese have the answer for that, too. On March 14th, White Day happens. White Day is when men give giri choco to their female coworkers who gave them chocolate the month before. This is traditionally white chocolate, but also white boxes of milk chocolate or sweets are acceptable. If a man given honmei choco by a woman wants to let her know that he feels the same way, he gives her a gift on White Day—I've heard white panties are popular.
Posted by Chandra Rooney at 1:54 PM 2 comments: Links to this post

filed under: True Tales of Japan

The bars slid shut with an omnious clank. Not the sleek swoosh of an automated door, but the spooky old-timey clank of doors that still insisted people shut them. It was dark, dingy in the cell. The cinderblock walls and unidentifiable smell made it strangely reminiscent of a college dorm.

Turning, the figure looked at the stern guard on the other side of the bars.

"Is this about those music downloads?" he tugged at his collar. "Because that's not illegal where I'm from."

The guard made a noncommittal grunt and began to walk away.

"No one informed me it was illegal here." The figure gripped the bars, pressing his face as close as he dared to them.

The sound of the guard's laughter reverberated off the stone walls.

The figure felt his heart sink. One last thing to try. "I have diplomatic immunity, you know."

His only answer was the slamming of another imprudent door.
Posted by Chandra Rooney at 8:13 PM 1 comment: Links to this post