I would like to announce my first sale. ON SPEC magazine has accepted my 1770 word omake (one-shot stories) for publication in a future issue.

This means, uh, they're going to pay me. And people are going to read something I wrote. Like... not on the internet or hear me read out loud at LAWG. Like in a magazine... on sale in a store.... and I didn't pay someone to put me in the magazine....

Words won't go together in an intelligent way right now.
Posted by Chandra Rooney at 9:04 PM 5 comments: Links to this post

filed under: published, The Rainy Season

Restless. Like I want to travel the world or get lost in the mountains. Is it summer? The passing of the solstice and knowing that everything from now on is just less and less light all the way until the year is over and I'm a number older and I can't find where this number disappeared to?

Maybe I've overstayed my welcome in this city, which is crazy to feel like since it's only now that I know people, feel like there's a group to belong to and a person to call when I'm bored and so many places I've never been.

It's the breeze that I can feel across my bare feet, how it slips in through the open windows, and the heat hasn't yet become unbearable, and there's still time before I have to return to work. I could leave, go somewhere—but where? Shouldn't I be here, like it's an office, like I have a full-time grown-up job, like I'm an adult?

I should finish that chapter. I should finish the novel. I know what to write—it was there a moment ago, the words appearing on the page in my brain, and the words on that page are always better than the ones that show up on the screen. Even when they're not.

But I'm not, because impatience is tied to restlessness with a silver ribbon—wrist bound to wrist with a chain made of satin—and where one is the other must be.
Posted by Chandra Rooney at 4:41 PM 1 comment: Links to this post

I’ve let go of the consequences. Nothing beyond this moment matters. Nothing. The future was what held me back—that egg of golden opportunities I nurtured with the hopes it would hatch into the perfect life. I believed the lie. Went to sleep and willing lost myself in my own illusions.

We’re told the truth pierces through—hits like a right hook and drowns us in waves of clarity. It doesn’t. It’s more like having your collage of the world attacked by scissors. There’s the initial pierce, then a lot more pain follows as the membrane of your bubble is hacked through.

I thought I could mend it faster than anyone could cut. But it’s not an erased sketch that can be penciled back in. No, the truth spills ink over the image, and all the pretty imaginings vanish in a wave of black.

All of them before, every one of the things I hunted, they were practice for you. You, the smug moth who thinks he’s a butterfly. Who doesn’t see the glass that separates what you are and what I was born to be. You think they’ve opened the window and let you inside. You’ve got no idea what inside is like. This is my house, and pests like you aren’t welcome.

You lunge. I spin, my heel connecting with your shoulder. There’s no more need for words. For ranks. For favor. I know my job—my place. Very soon you’ll know yours.
Posted by Chandra Rooney at 2:15 PM 1 comment: Links to this post 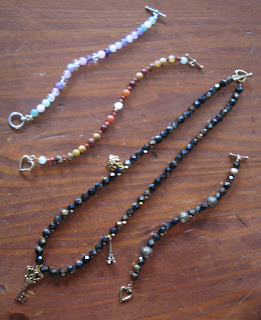 Since deviantART is having one of its CSS-fractured days for me (they've been a constant this week,) I can't put this up on the art site. So I'll share it here. These are two bracelets and a necklace and bracelet set that I made today.

On the top left is a personal bracelet finished with what I'm guessing is a nickel-base clasp. (There's a detail on the claspe you can't see in the photo.) This one was created to be more function than fashion.
Jade - wisdom, mercy, humility, generosity, peace, and harmony. Protective and lucky when worn as jewelry.
Amethyst - increases vivid dreams, relieves depression, promotes calm, serenity, and spirituality. Helps with addiction and stress.
Quartz - the greatest of all healing stones. Acts as an amplifier for psychic energy and aids meditation and visualization.
Rose Quartz - great for attracting love. Promotes self-loving and heals emotional wounds as well as promoting peace, forgiveness, and nurturing.


The second from the left is a fashion bracelet that was composed based on the colors of the beads. They're all semi-precious stones, although I couldn't tell you exactly which ones, aside from the sunstone faceted mini-beads between the round ones. Its finished with a heart "gold" clasp. 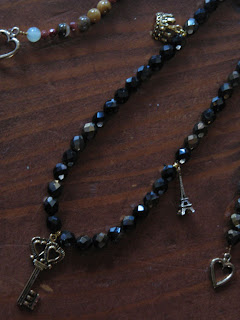 Here's a detail shot of the necklace. It's black-gold faceted glass beads with three "gold" charms. An Eiffel Tower, Crown and Antique Key with heart details. I think of it as an Ode to Paris. Finished with a heart "gold" clasp.

This is a bracelet that could be included with the necklace in a set, although it only fits my tiny child-size wrists, so I'll probably make a larger one with some of the remaining faceted beads. Not sure if I'd put any charms on it or not yet. It will, like this one, be finished a heart "gold" clasp.
Posted by Chandra Rooney at 9:28 PM 1 comment: Links to this post

There was a response waiting for me this morning regarding the 55 word story I submitted. It was a very polite no thank you, and that's all right. I wrote the story in 15 minutes, it wasn't astounding, and I only submitted it as an oh, what the hell kind of thing.

Would it have been great to have gotten it accepted? Sure, but really, it's hardly the best piece, and it was the act of submitting not the acceptance of a submission that I was practicing.

They can't say yes if you don't ask.
Posted by Chandra Rooney at 11:39 AM 2 comments: Links to this post

It captured me like one of those jungle traps—you know the ones, where the floor looks green and solid, but it’s really just palm fronds over a hole someone dug. Like that the earth is no longer under your feet. Whoosh! You go down, but instead of breaking an ankle, you break into a sweat. What you find is brilliant, important—one of those shimmering missing pieces.

A glimmering truth about the characters and their world that seems so obvious that you wonder how you could not have realized that in trying to emulate one character, the other has become more. They’ve grown into someone wise and kind and responsible. Now if only they’d break the rules of how they interact and assert that no, it really is a stupid plan. No, it isn’t best to deal with a discovered lie by adding greater and more elaborate ruses to cover it up.

Maybe they already realize this, and that’s why they’re unconscious—so their arc doesn’t end while others are too busy floundering and finding out that they have to solve their own problems.

There’s still half a book to go, and it’s all uncharted waters like a cruise where you’ve heard the names of the ports, but you’re not sure the route that lies between. It would be less scary if all the readers hadn’t loved what the old story was, even though it was really just that flawed first bit of brilliance that doesn’t shine as much as you thought, because you’ve realized you can’t fix something broken until you honestly admit it’s broken and let go. Let go of all those beautiful lines and heartfelt, clumsy scenes.

That’s how you land on something better.

Created from a prompt from a writing exercise.

She was the kind of girl who brought out the chivalry in him, and made him want to say “thou” and “shalt” and words older than even him—words she wouldn’t understand, but their phonetics and his tone would express the ache in a way modern English couldn’t.

She played him like a gramophone—wound him up, never fast enough, and the lyrics of his longing became discordant, unconnected sounds. You must know this, so you know why it took so long to find the perfect silence.

On the banks of the North Thompson, where the sand and the water met, she stood bare foot, her eyes daring him to claim his prize.

The river’s undertow was almost as notorious as hers, but she had yet to drown a man. There was high school for that.

She said if he made it to the island—a patch of dirt home to saplings and discarded beer cans—she’d kiss him when he came back.

He made it. His purple swim trunks were still dripping with the frigid September water. He made it, and she was trying to suggest he cheated. Not to be insensitive, but because she knew how much he wanted the kiss.

His numb fingers were warming against her sunburnt shoulder, as she finally stopped teasing and got down to business.

“No tongue,” she said, and he never thought to argue.

She breathed warmth between them, as his face drifted to hers. Her long, dark lashes fluttered—and he wondered if he should tell her she didn’t need the blue eye shadow or the mascara—she was the prettiest girl he knew, and fourteen was the perfect age to be.

He hesitated. She grew impatient and stepped into him. Lips met lips. Eyes, opening and seeing for the first time, met eyes. Fingers intertwined. One of them tasted like strawberries. Him or her—who could say?
Posted by Chandra Rooney at 6:10 PM 1 comment: Links to this post

Calvin once complained there were not enough mechanics in the world. When he said this, he didn’t mean individuals who tinkered—to use the professional jargon—with complicated machines. He meant he felt the workings of the world had failed to be properly laid out. As a result, the world failed to operate in any logical way.

Our Calvin came from a simpler time of telephones and customer service that required interfacing with someone outside of our home.

“Convenience be damned,” he used to say. “Just let me speak to a person.”

Somehow he could tell, despite that the help AIs sounded like people to us. No, Calvin knew. We used to test him, playing the audio clips to him one at a time. Without fail he could identify which ones were synthesized and which were authentic.

“Authentic” was one of his words—strange vocabulary that referred to a time long before we’d been born. We started calling it the Mechanic’s Time.

Calvin smiled sadly when we did, his wrinkles wrinkling. I guess he thought we didn’t understand—or that we couldn’t.
Posted by Chandra Rooney at 6:09 PM 1 comment: Links to this post