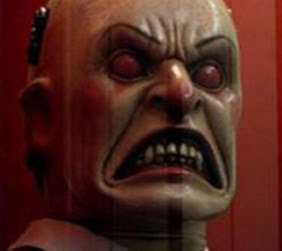 I enjoyed "The Beast Below" more than "The Eleventh Hour," because this second episode gets back to what Steven Moffat is really good at: Scaring the crap out of us.

What I really adore about Doctor Who—especially when it's done well—is the creation of an entire time/world within a single episode. The social/political issues of Starship UK hit close to my heart, as we're asked should we willfully wipe the truth from our minds and the issue of choice versus the illusion of choice.

I love that Moffat created the parallel between the voting booths and Amy's desire to protect the Doctor from the choice. His anger at the decision being made for him—"You don't get to choose what I know"—was the most human 11 has been yet. Also the oldest and the kindest and the very last... was beautiful. So it was wonderful to get to see the depth and range of emotions from all the characters.

Loved, loved Liz Ten. She was rocking the little red riding hood and the six shooters—it was like something out of Buffy! Loved the Winders and their gas rings; terrified of the Smilers, and can't believe that Starwhale vomit was a legitimate plot point.

My only concerns are that dear lovely Matt Smith doesn't quite do angry as well as his predecessors and the recap. Not questioning the necessity of connecting the dots for the audience—it is a kids show and the delivery was handled well—just the placement in this episode. It took away from the tension a little to do a breadcumb collection in the middle of "OMG THE DOCTOR IS GOING TO FRY A STARWHALE'S BRAIN." (Maybe that was the point?)

Two final thoughts: (A) Starwhales make me think of Peter Watts, and (B) I can't wait to see 11 hit a Dalek with a mallet.
Posted by Chandra Rooney at 7:11 PM 2 comments: Links to this post

Two weeks have now since I last had any word on the progress of FRAGMENTS with editors. There was a second pass the week I was in NYC; it sounded like we had an editor but the publishing group wouldn't come on board—and they get the final say. So it went a step further—as far as I know—than anyone else has taken something, and it was from one of the original round of editors. (Also known as They Who Remained Silent.)

We shall see what next week brings.
Posted by Chandra Rooney at 1:20 PM 2 comments: Links to this post

It's also Antiphrastic's birthday, so happy to you. I heard she got Beatles Rock Band...

I spent the day getting reviews up on Community, working on signage for Kimberly Derting's signing, and wondering how Spider Girl got her powers. (It's a mysterious mystery that I realize Wikipedia could easily solve for me.)

I've been running the numbers, and I'd like to share something with you. Let's posit that this manuscript I'm drafting is going to be 75,000 words. (Honestly, I don't know. The fox one was longer because it started out as an adult novel, so I'm guessing about 75 kilowords as FRAGMENTS was about 73.) If I write 1000 words a day—a very manageable goal—then it would take 64 days to complete. In other words, I would have a draft by the end of July.

I'd better get cracking.
Posted by Chandra Rooney at 6:48 PM No comments: Links to this post

This is what I told a friend earlier today: Being a writer is like being Spider-Man. She responded by asking if I meant with great power comes great responsibility, which is appropriate but not really my line of thinking. Nor was I making a clever link between costumes and pen names. (Y'know, like superhero costumes, most pen names are funny looking.)

Peter Parker has one of the crappiest lives in all of comicdom. He gets the stuffing beat out of him on a daily basis defending a city that acts like most of the time that they'd rather he pack it up and move to Jersey. He can't ever seem to get a break—and when he does, you know it's because something is probably going to go wrong as soon as you turn the page.

Despite this, he's still out there webslinging like maybe today's the day when things are going to go his way for a change. Being Spider-Man makes his life hell, but he does it. (I don't believe it's completely motivated by his guilt over what happened to Uncle Ben.) Something I always respected about Pete is that he walked away. He threw that suit in a trashcan and tried to have a normal life. He even succeeded for a little while.

There's only so much crap that any human being—super powers or not—can take. Burning out and walking away? It's what makes Peter Parker sympathetic in a way that Bruce Wayne will never be.

Last year, I had had enough being bounced off brick walls. I threw that Serious-Writer suit in the trash can and was all "I am seeking publishing no more..." Sure, my eyes strayed to where I'd stashed the spare mask when I heard of other author's deals. It's hard to break the habit. I even put the boots on for a couple weeks in November. Y'know, just seeing if they still fit.

As life fell apart around me, I realized that I was hurting myself more than any rejection letter ever could. I was denying what gave me purpose. I'm not saying there aren't other things that provide a sense of fulfillment, but there's a hunger that only writing truly sates.

filed under: spider girl, there is no box 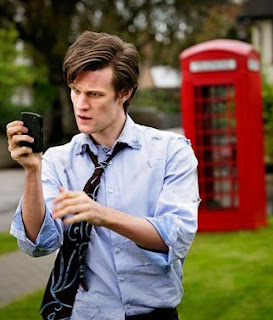 One of the greatest things about watching Doctor Who is watching someone meet the Doctor for the first time—or meet him again with his new face. Realizing they've stumbled onto a fantastic adventure; a show that can be everything and anything. One that doesn't just reinvent itself each episode as a different genre, but reinvents its main protagonist as part of its mythos.

When we get a new Doctor, the show celebrates it. Everything is new again for us, because it's all new again for him. We needed that after we said goodbye to Ten, because 98% of us weren't ready for David Tennant to leave.

Matt Smith, however, is the Doctor. He breathes the role from the moment The Eleventh Hour begins. This new Doctor is confident, but not arrogant. He's silly, but not manic. He takes everything in stride, and when he spins around or he does something completely mad... it seems natural. As it should be.

Amy Pond is fantabulous. 11 has his hands full, but their collective madness balances out to a dynamic, powerful chemistry that compliments the tone of the show perfectly. And yes, the whole she's running away before her wedding day is a little obvious but it's not the annoying kind of obvious. It's the writerly kind—the "Aha! I was right" when the reveal comes.

One of the reasons that I admire Steven Moffat so is because he can take something like a statue and make it terrifying. He can transform the simple into the fantastical. He does it without losing a sense of humor. His Doctor Who episodes are usually more moving, more terrifying than any "mature" show on television. They're less blood and guts and more psychological and gothic.

If The Eleventh Hour is an indication of what's to come, we are in for a hell of a ride this series—and I, for one, can't wait to see where we go next week.
Posted by Chandra Rooney at 2:08 PM 4 comments: Links to this post

So there wasn't any actual in NYC blogging besides my last post.

I have a travel journal that I need to sort through so I can weed out the personal things that aren't really meant to go in the public domain and some photos that I need to get organized. There will be blogging, but it may not be until next week since I haven't had a look to see how many of the photos are actually in focus.

Quickly, I loved the city. Loved the hotel. Very much want to return there. I did, even, consider how I might come to live there... then realized I should probably be a little more realistic/practical about that sort of thing. ;)

More to come....
Posted by Chandra Rooney at 2:03 PM No comments: Links to this post

As I said on twitter, I'm sitting in Art Deco Heaven—AKA the Waldorf=Astoria lobby, where the wifi is free. It means I have to make an effort to come check my email, but it's pretty chill and there's currently some live piano+vocal music happening in one of the lounges that's providing lovely bgm.

This is probably the most relaxed I've been all day, which was spent in a hellish customs line and airplane/port limbo since about 7:30 this morning. We've already walked past St Bart's and visited the amazing Grand Central Station.

Tomorrow is insane, as three days worth of touring gets squeezed into one. I'm headed back up to the room for a shower and to get to sleep.
Posted by Chandra Rooney at 9:17 PM 2 comments: Links to this post

As I sit in a quiet area of YVR, it occurs to me that travel and a lack of caffeine is perfectly expressed in the slightly hazy way the mist clings to the trees beyond the terminal buildings and runways.

It's one of those grey cloud-moving mornings that are best spent in bed, writing, or well, on a plane to somewhere that isn't so grey. Since I can't have the first option, I'll have to make due with the second then third.

I'll be in NYC this weekend—an insane packaged tour that I was invited to join as part of my aunt's birthday. I won't tell you how old she is, but it's one of those significant numbers that requires doing something impressive. Although, I am stepping out of part of the plans to spend an afternoon with my agent.

Next week, I've got a couple days in Edmonton to recover from the jet lag and then I'll return home and to thejob. At some point I've got to look at a manuscript that a friend has been waiting to hear feedback for. Not sure when, but there will be travel blogging about NYC. It'll just depend on when I can get to it.
Posted by Chandra Rooney at 2:08 PM No comments: Links to this post