The problem with Toronto is that I keep finding things to do.

Or someone at work finds an invitation to an author party for a book she remembers that I loved and passes said invitation along and I hastily RVSP at 1:30 pm for something at 5:30 pm.


That's how I ended up at a Random House Canada party earlier this evening for Erin Morgenstern's The Night Circus. Well, ok, it was a little more complicated than that as going to the party involved find a reveur  at a specified location and then being led with some other people on a mysterious adventure through closed streets and around corners and then down darkened stairs to meet Erin.

Where we were didn't matter. (Or if you're certain that it does: a bar called Trevor, and it was apparently on Wellington.) Location is secondary to the world of the Night Circus, because the circus is its own world. People came dressed all in black—ok, it's King West, they were in all in black anyway—with a touch of red and there. A pocket square. A scarf. A group gathered together and not quite sure what to expect, but eager for it.

The whole event, for me, captured the experience of reading The Night Circus. Being handed an invitation, then adventuring off to locate a fellow reveur, and then traveling together to unknown locale to meet Erin Morgenstern. It was mysterious and wonderful, a well-designed and executed experience.


Also we were served cotton candy and that is now the height of awesome to which all other book events must aspire.

The problem with "events" is that some times they fail to be events. They don't leave you with a lingering awe and the feeling of attending something you couldn't have put together on your own. I can tweet Erin. I imagine that at some point through mutual acquaintances and sheer force of will, I could've managed to meet her in person. But it wouldn't have been like this. It would've been less—and the story wouldn't have been nearly as good.
Posted by Chandra Rooney at 10:00 PM 3 comments: Links to this post

Toronto, among other things

Somehow it became Autumn, a blur of weeks and weeks with little time to catch my breath and only stopping to realize I had turned thirty. I don't mean to suggest I gave no thought to turning thirty; I gave it perhaps too much thought.
You see, I—like everyone else—had an idea of what my life would look like at this age. A vow made when I had turned twenty-six and thought I had the world all worked out. It was the closest I've ever come to making a five-year-plan, and I had a hard time accepting that what I had so planned for was beyond my control. We get these numbers stuck in our heads, these self-imposed deadlines created with no understanding of the process or the factors that have to align it make them happen. Maybe that's what it really means to grow-up, to understand shifting timelines and compromise.
All in all, September 19th was a good day to turn thirty, a day on par with turning twenty-five—filled with surprises and time spent with people of my choosing. It passed quickly for an event spread out over three days so that I could spend moments of it with different people, allowing for it become various experiences instead of just one forced to hold all of those expectations.
There's not much to say about work—or rather, there's an awful lot but it wouldn't be professional and even if it was professional, much of what I'd have to say would be dead boring to anyone who didn't do my job. The job's not boring, mind, you just won't have the context of the little frustrations and victories. Some times not pulling aside the curtain, exposing the wires and mechanism that make the trick work, is more beneficial. Let's just say, if you go to the facebook page and follow the twitter account... you see maybe 30% of what actually occurs day to day. The other 70% involves me helping to move the mirrors around. (While trying not to drop them, for they are numerous and heavier than you think.)
As for everything else... At a point, all of what you have to say, all of what you could talk about, becomes so much and so lengthy that you say nothing at all. I think what I do for 40 hours a week, how public that 30% of it is, has made me hold on to things that are personal and keep them private. I'd rather share them where they don't gain the permanence of becoming how I appear to feel whenever someone reads a blog entry. Time is strange on the internet; I don't feel constantly the way I'd be prone to express feeling if I blogged every day.
Also, the time it would take to blog every day is better spent drafting or out in the city or sleeping.
I miss the mountains, which may seem a strange thing to miss but they're the place-thing so immediately and undeniably not here. I don't love Toronto. Occasionally, I'm fortunate enough to spend an afternoon with a friend who does love it and the feeling's contagious.
That said, I haven't ruled out the possibility of loving Toronto. It's a slow romance, and not the immediate infatuation I felt for the other places I've lived. And I wonder if everyone who moves somewhere for a job, and not for the love of the place they're moving, feels this. Is it circumstance or city that gets in the way?
Some days I catch myself counting down until my contract ends, not with relief, but like it's a vacation and ticking away is that reminder that my time in Toronto is limited and it's best to do all I can while I'm still here to do it. Other days, I think I could stay; I think I could call this place home. I think that I could want to.
So that's why I don't blog much, because these are the kind of thoughts that come across as melancholic and make people worry—and it's not my intention to make people worry. Just to express that not-loving a place is valid and different from hating it. It's hard to go anywhere from something as definite as hate. Uncertainty has options.
I'll leave you with three images. One is text: In my search for familiarity, the subway in Toronto becomes the one in Kyoto—the Bloor backbone of this city momentarily somewhere else; the above inconsequential because of misremembered similarities of below. 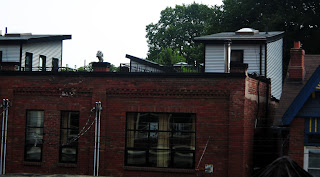 A stone guardian sits atop the High Park Garage. 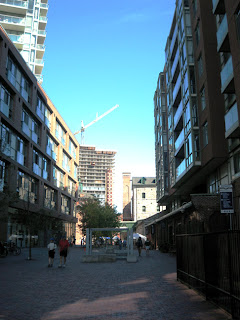 The Distillery district, whose bricks helped inspired what I'm drafting.
Posted by Chandra Rooney at 8:39 PM 3 comments: Links to this post